Up until now I have been using a single 24″ monitor af outside view. Not in any way an ideal solution at all.

I did try a Dualhead2go last year. But first of all it reduced my frame rate by half. Further more it was a hazel flying with the centerline split between two screens. So in the end I sold the Dualhead2Go. And when my frame rate was so heavily reduced by two screens I did not dare to consider a TrippleHead2Go. So all the way I have been thinking a projector would be my ideal solution.

The physical space available in the room where the cockpit is, is limited. So a projector will have to be a short throw model that can project a 2 meter wide picture in about 1 meters distance. Furthermore due to this project being “A Boeing on a budget” price is a factor. So I have been on the lookout for a used projector. But I thought most of what I could find here in Denmark was too expensive when considering age and lamp-time compared to a new BenQ 1080W. Most started at €300 and up. 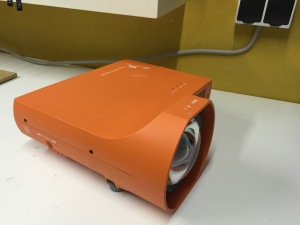 I talked with David a fellow builder from Northern Ireland about projectors. He is building his 737 inside a cupboard. So he has the same challenges as me with space being a factor for how big a picture you can get. David is using a Sanyo PLC-XE40 that he recommended to me as a good value projector that suits our needs. And it turns out eBay in the UK is full of these. So I found one for just £100 (€130) with 800 hours left of lamp time. Simply a bargain! It arrived yesterday.  And thanks to David for pointing my attention to the Sanyo model!

The orange colour might not suite everyone. But hey! It is located above the overhead panel nowhere to be seen. It can fill my entire backwall – that is 2,10 m wide – with a picture while being no more than about a meter away.  And because the cockpit is in a dark environment most of the times the projector is fully capable of giving a clear picture.

And so I needed to mount the darn thing in the ceiling. Projector mounts were unbelievable expensive. Nothing could be found for less than €50 and normally prices started around €100. Well I did it for €1. Yes one, ein, uno, un euro. 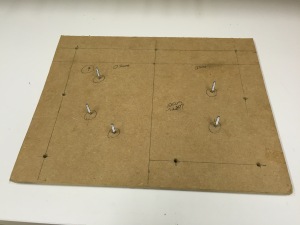 Again remember that the projector is hidden away above the overhead. So none is ever going to see it.

But all it took was a piece of MDF, 4 cm wider than the projector to each side. The manual to the projector had the layout of the mounting holes with measurements. The projector is mounted to the plate with 4cm M4-screws (as you can see on the picture). Then plate is then mounted to the roof with some of the 9 holes along the edge.

Next I am off to IKEA to get a TUPPLUR curtain that will act as projector screen.