I have always been fascinated by OEM panels – real panels from an aircraft that has been in service for many years and have that wear and tear. But also products that have that sturdiness and heavy duty feel.

Normally these panels are quite expensive; especially if they have been inside a 737. But last month I found a seller on eBay that had a collection of Boeing panels for sale at low prices. So I bought 5 panels. Not all from the B737-800, most of them are from earlier generations and some not even from the B737. But they will nevertheless be used in the cockpit.

I bought 5 panels for a total of $115, which converts in Danish currency to 737 Kroners.

May I present you:

Audio Selector Panel
The real NG-panel is hard to get your hands on and very expensive. This comes close. There is a button missing apart from that the mechanics are working. Just the 16 push/turn potentiometers are worth quite a lot. There are two toggle switches. The one to the left is spring loaded so I will use that as a Push to talk for online flights. 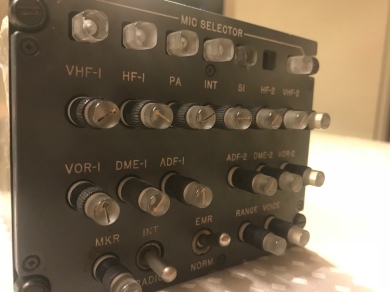 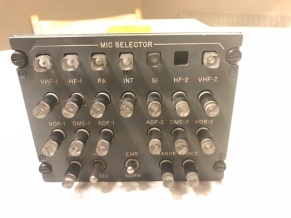 Stall Warning Test
This panel is actually found og the B737-800.
It is not backlit and just consist of two push buttons. But compared to our normal push buttons you really can feel the difference. They are build to last! 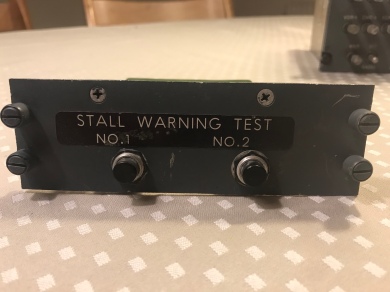 VHF NAV / Compass panel
This panel is only partly found on the B737NG. The Compass is replaced with a “IRS” selector. But that is close enough for me. It looks great and hopefully I can get the backlightning to work. It also comes with two on-off-on locking toggle switches. Again some real aircraft quality.
The price was just $20. Just two toggle buttons are worth more. But I think I will install this panel even it should read IRS and not Compass.  This is one of the panels what I an looking to get working – especially the see real backlightning on a 737-panel.

Weather Radar Panel
Not from the B737NG. I am not even sure it has ever been on a B737. But it has the same functions as on the NG: Tilt, Gain and a selector.
So even thought this particular model is not the NG it still gives me the necessary functions. I need to open it and see what it contains and if it can be interfaced directly or I need to replace some of the components.
It comes with a selector that features  “pull to turn” in order to select TEST.

Oxygen Mask Mike panel
This is not from the B737. It might be from a B727. Eventhough not found on the B738 I might add it to the overhead just for the looks and feel of it. I got the panel for less that $10. It has both a push button and a guarded toggle switch. So if nothing else I might scrap it and use the parts.

Regarding different versions of the cockpit

One thing that I have learned researching for the purchase is that there are many-many different configurations for a cockpit. What we normally regard as “as it should be” can be very different from company to company. So panels like the Weather Radar might actually be found on a older 737. I have looked a bit in to the different panels but I am not exactly sure in which model they were used.

Another thing worth noticing is the difference in colour. Whey are not the same tone of grey. I have seen other cockpit builders hunt down the exact same RAL7011. No need to do that. There are different tones of grey in that cockpit!

Sound setup for VATSIM »
« One step forward – one step backward