So the last couple of days has been quite boring.

All buttons are now glued and painted black. Unfortunately a few of the menu buttons didn’t fit so I had to re-glue them before they can be used. It was a matter of less than a millimeter that the additional spacers (That I mentioned in part 2) were off. But enough to make it unable to fit. 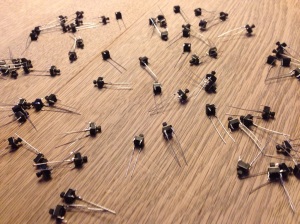 Yesterday I mounted extending legs on all switches. Without the legs on the switch would not go through the mounting plate, making it difficult to add wires. So now two legs on each switch are extended.

Took all evening. It is in those moments that you consider if it really was worth saving those euros instead of just plugging it in via USB. 🙂

Furthermore backlighting was added to day as well. Another boring task of soldering LED strips and gluing them on. However again – I will give LED strips my warmest recommendations. It is very easy to work with. Picture to the right shows the mooting plate with all switches in place, backlighting wired up.

Yesterday I also took my PsOne screen apart. It appears to fit the FMC perfectly. That is the good news. But then I also started reading up on how to connect the monitor to the computer. It looks quite complicated. So I have a bit of reading to do, and some shopping on eBay to do.

So all in all the last couple of days have been boring tasks. Hopefully I should be able to assemble the things with in a few days. Then is it “only” a matter of wiring the switches in the matrix needed (When talking of boring tasks…).