The last couple of weeks has been used on the pedestal. Here is the result (so far). 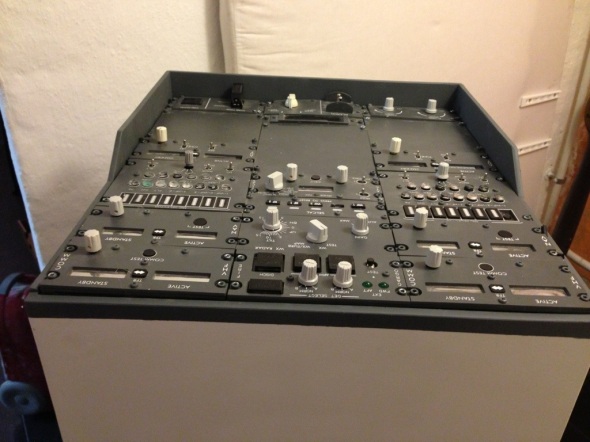 The panels are from ProSimParts and a very nice quality.

The pedestal bay is made from 6mm MDF that has been sanded and then painted with RAL 9002 (And RAL 7011 on the top part).

So far only 5 panels are working: COM1, NAV1, NAV2, ADF1, XPNDR. It is connected inside the box to a OpenCockpits MasterCard and 3 DisplayCards.

So far I only and used one input-bay on the Master Card so I can still connect some 36 buttons and 38 LEDs. But for now the radios will do just fine. Later on I will explore the ProSim-suite and see what else on the pedestal that can be interfaced. 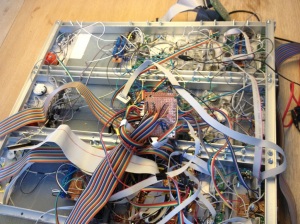 A few weeks ago I wrote about problems with the wiring to the 7-segment displays. That is almost solved now – but only almost! But yesterday I found out that two of my encoders also if broken or not wired properly. So I have to go through most of the wiring of the pedestal again. [irony]Not that there are many wires on the back side[/irony].

So an extra evening worth of soldering should be waiting ahead.

Last – but not least – I need to get some coding in SIOC done. Because I only use 1 single encoder per radio-unit I need to find a way to both parts of the frequency with one encoder.

Apart from those small issues I am very happy with the final result of the pedestal.

There are still a few minor things I need to make. Mostly the combined push-buttons / annunciators on the cargo fire panel.

But for now I am just enjoying the visuals of my pedestal. It has taken me almost half a year to make it (But of course I have also made other parts of the cockpit along the way) so it is a well deserved beer laying ahead!

Can you guess what this is? »
« Let some steam out

One thought on “Pedestal (almost) finished”